Is a New Hadron Collider Needed? 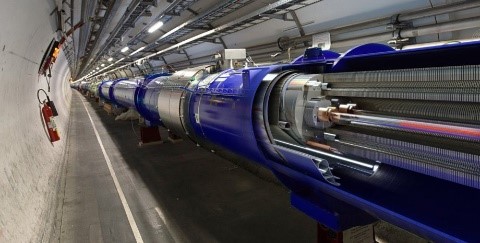 The Large Hadron Collider (LHC) at CERN is the most powerful particle accelerator in the world. In ten years of work, he has enabled remarkable discoveries, including the long-awaited Higgs boson. An international team of physicists has unveiled a conceptual design for a new particle accelerator that will make the LHC look tiny.

The Future Circular Collider is conceived as the successor to the Bolshoy. It could help figure out what much of the universe is actually made of, or even discover entirely new physics.

The project involves the construction of an underground tunnel 100 km long, passing under Geneva and the surrounding countryside. Particles will pass from the LHC, which is 27 km long, to the new collider. This will make it possible to collide particles accelerated to an energy seven times greater than in the LHC. It will make it possible to conduct research beyond the capabilities of its predecessor, and will be able to take particle physics into the unknown microscopic world.

A future cyclic collider could open a door to a world of dark matter that we haven’t discovered yet.

The creation of the Future Cyclic Collider is divided into two stages. On the first one, a machine will be built that collides electrons with their, so to speak, anti-matter version – positrons. It is believed that each particle has a pair of antimatter, almost identical, but with the opposite charge. When pairs meet, they completely destroy each other, and all their energy is converted into new particles.

The collision energy in such a collider can be controlled very precisely. In addition, the collisions will be very “clean” compared to the LHC, which pushes protons together. Protons are not fundamental particles, like electrons, but clusters of smaller particles, including quarks and gluons. When they collide, their “innards” fly apart, making it difficult to find new particles among the “debris”.

The main goal of the electron-positron collider will be to study the Higgs boson, which is responsible for the origin of the mass of other fundamental particles. It will be able to create millions of Higgs bosons and measure their parameters with an unprecedented level of accuracy.

This promises numerous opportunities for new discoveries. One of the most enticing is that the Higgs boson could act as a portal connecting the world of ordinary atomic matter that we live in with the hidden world of particles that we have not yet been able to detect. About 85% of all matter in the universe is dark. We know that it exists only by the gravitational pull it exerts on surrounding matter. An electron-positron collider could change that and help see the Higgs boson decaying into its particles.

At the second stage, it will be replaced by a much more powerful proton-proton collider, in which the collision energy will reach 100 trillion electron volts. It will be a discovery machine capable of creating a huge range of new particles. This accelerator will allow almost complete coverage of the energy range in which most forms of dark matter are likely to be found. With it, scientists will be able to study the conditions that existed a trillionth of a second after the Big Bang. This moment in the history of the universe is crucial, because it was then that the Higgs field – an all-pervasive energy field, of which the Higgs boson is a small fraction – collapsed to its current state, which gave rise to the masses of fundamental particles.

Understanding how the Higgs field got to its current level of energy is one of the greatest unsolved problems in physics.

In addition, the new collider could also help solve another puzzle: why the universe is almost entirely composed of matter and not antimatter.

The implementation of the first stage of construction of the new collider is scheduled for the 2040s. It will take place after the final launch of the upgraded LHC. Phase 2 will be implemented a decade later. Both projects will cost quite expensive – 24 billion euros in total. Such a price tag has already caused reasonable criticism. Some argue that this money would be better spent on something else. For example, to combat climate change.

However, physicist John Womersley, who is involved in the development of the Future Cyclic Collider, notes that the BCC promises less obvious benefits, in addition to expanding the fundamental knowledge base. According to him, the Future Cyclic Collider will spur the development of innovative technologies needed to solve related problems. At one time, to meet the needs of fundamental physics, the Internet, Wi-Fi and superconducting magnets in MRI machines were developed.

Such an ambitious project will only be possible through extensive international cooperation with funding from dozens of countries. It already includes 1,300 members from 150 universities and research institutes, as well as industrial partners from all over the world. Meanwhile, China is also thinking about a similar project – the only country capable of mobilizing the resources necessary to independently create such a grandiose machine.

Supporters of the Future Cyclic Collider hope that the project will be included in the new European strategy for particle physics, which will be published in 2020.

The path of the project will certainly be littered with obstacles, but physicists are determined not to give up on the pursuit of a deeper understanding of our universe.