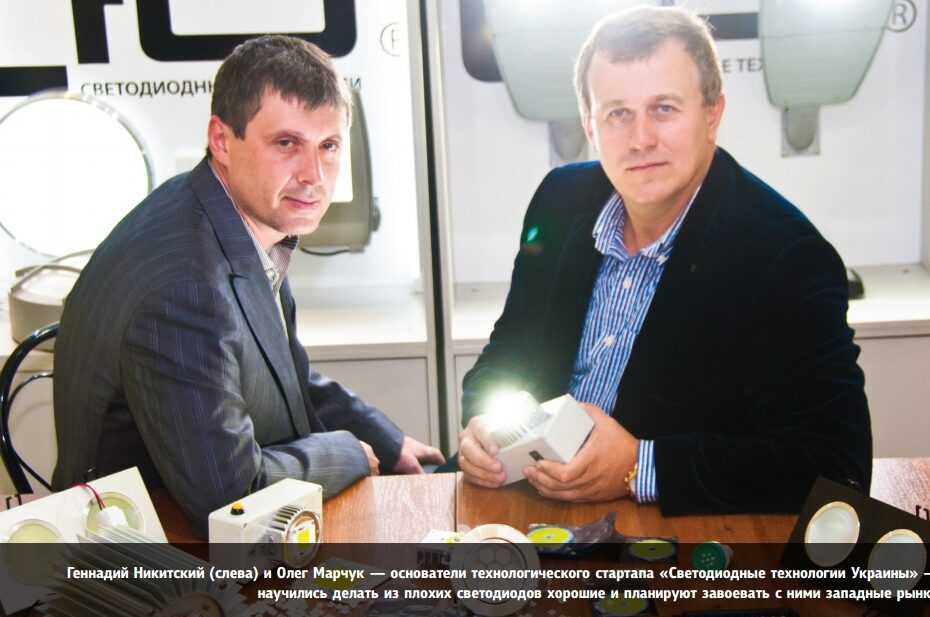 On a dark night, it was difficult to find the road to the mining village of Bogdanovka in the Dnepropetrovsk region six months ago. Now both residents and visitors are guided by the glow that appears in the sky at night. The local authorities are pleased: in the future, the new LED lighting will save the village a significant amount. Bright light on the three streets of Bogdanovka appeared as a result of a public-private partnership project. This was one of the first projects for the LED Technologies of Ukraine company, a newcomer to the lighting market. Why did the regional administration choose the offer of this company? Her team managed to win the competition thanks to a technology developed by Kharkiv physicists from the Research Institute of Instrument Engineering.

Looking for a niche

Entrepreneurs Oleg Marchuk and Gennady Nikitsky began their first steps in business in the mid-1990s with the sale of metal and the distribution of food products. A little later, Oleg Marchuk, a mechanical engineer by profession, offered his partner to establish a construction company, which is still the basis of the Martex Group holding, which also includes LED Technologies of Ukraine. In addition to LEDs, the portfolio of businessmen also includes such projects as a tin container manufacturing company, a niche perfumery distributor, a consulting company, and a building materials company. What prompted you to search for a new niche? In 2004, the partners went on a business tour of Asia. They were looking for companies that offer new solutions in the construction industry. Initially, Ukrainians were interested in components and materials made of glass, wood, fittings. But, after looking at fifty enterprises and visiting a technopark in Shanghai, they abruptly changed their plans. “We saw that many enterprises invest in innovative products and thus become leaders,” says Marchuk. “Therefore, we also decided to bet on a product that will be in demand tomorrow.” The entrepreneurs had heat pumps and solar panels in mind. But the first devices were still a curiosity in the Ukrainian market, and the solar battery market, according to Marchuk, was overheated. Another idea concerned the processing of peat for the manufacture of fuel pellets and briquettes. However, it was not possible to reach an agreement with the Ukrtorf enterprise. “In 2007, many companies switched to fluorescent lamps, which were popular at the time, in order to save energy. We came across material about LED technologies, which then only appeared in wide use. And we decided to move in this direction,” says Gennady Nikitsky. The market for these products was new not only for Ukraine, but also in the world.

The idea of ​​Marchuk and Nikitsky was simple: they planned to buy components for LED lamps abroad and assemble them in Ukraine. Having sorted out, as it seemed to them, the technology for the production of LED modules, they purchased the first batch of crystals and organized pilot production. A crystal in the production chain is one of the most important components; the amount of light emitted depends on its quality. And just with them, Ukrainian entrepreneurs were not lucky. The first batch of crystals did not meet the declared standards. As a result, test samples did not give the required number of lumens – units of luminous flux. They were just dim.

Failure led businessmen to the Research Technological Institute of Instrumentation, to the laboratory of Doctor of Technical Sciences Vyacheslav Borshov. Over the past ten years, Borshov’s team has been involved in the preparation of the international ALICE experiment based on the world’s largest accelerator, the Large Hadron Collider. For the CERN experiment, Kharkov physicists have developed unique detector modules using ultrasonic welding. It turned out to be easy for specialists from research institutes to solve the problem of novice technology entrepreneurs. “Due to the unique processing of crystals, we brought their parameters to the required production rate,” says Vyacheslav Borshchov. The details of the technology are not yet disclosed, since the know-how has not yet been patented. “When physicists solved our first problem, we realized that we had a colossal intellectual resource at our disposal,” Oleg Marchuk confesses. “And we decided not just to assemble LEDs according to a standard pattern, but to find our own unique offer.” The weakest point of LED technology is heat dissipation from the crystal. With a poor-quality tap, the crystal is quickly destroyed, and the product fails. Businessmen challenged scientists to solve this problem. Physicists, taking as a basis the technologies developed for the collider, created custom-made single-crystal matrices that ensured efficient heat removal. The technological solution cost businessmen UAH 200,000. The technology is patented – businessmen own it together with research institutes. The innovative solution of Kharkiv physicists makes it possible to use a smaller number of crystals in the production of an LED module compared to the generally accepted standard. “If you need an LED with 12 crystals to replace one light bulb that gives a luminous flux of 120 lumens, then we can provide the same amount of light with just nine crystals,” Gennady Nikitsky is proud of his competitive advantage.

Since 2010, the LED Technologies of Ukraine company has organized the production of LED light bulbs for the mass consumer. They were sold through large retail chains, but the buyer was not ready to choose more expensive lamps, even despite the 10-year warranty (a 5-watt lamp replacing a 60-watt lamp cost about 50 UAH). And businessmen, who already invested $500,000 in the project, were not ready to invest in education and marketing campaigns. The mass consumer still looks attractive to them today, but they have postponed the task of winning it for the time being. Now Marchuk and Nikitsky consider large manufacturing companies to be their main clients, to which they offer turnkey solutions. Such projects include not only the installation of LED lighting, but also support during the five-year warranty period. This makes it possible for large enterprises to reduce the cost of maintaining lighting systems.

“At first we had problems with how to convince large businesses to buy LED lamps,” admits Oleg Marchuk. Partners did not hesitate to present their own innovative products in business circles – at meetings in business clubs and conferences. This has borne fruit – the first customers and fame at the level of the regional administration. One of such clients, for whom a personal presentation of the product was important, is the director of Ukrenergomash, Vladislav Tereshchenya. “We tested LED lamps in one workshop of our plant and, according to the results of the month, received a tenfold reduction in energy consumption – if earlier 120 kilowatts per shift were burned in one workshop, now only 12,” says Tereshchenya. This inspired the owners of the company “LED Technologies of Ukraine” to the next innovation – to offer solutions that do not involve the replacement of luminaire housings. Instead of a traditional light bulb, an LED module is mounted in the old case. This solution eliminates the cost of dismantling fixtures and new housings. “Lights are used in the Kharkov-made LED street lamps, which, due to the design, provide maximum illumination and at the same time consume minimal electricity,” says Vitaliy Vladimirov, owner and director of the Etra construction and installation company, another feature of the LED Technologies of Ukraine products. In 2012, he made purchases of lanterns for street lighting four times. He says that in terms of price and quality he compared them with both Chinese and German ones – Ukrainian ones turned out to be 30% cheaper. On the Ukrainian market, the cost of Chinese LED modules with a power of 50 W, depending on the manufacturer’s company and the type of crystals, after passing through customs procedures and paying for delivery, can range from 550 to 900 UAH. The price of the Ukrainian module is 400 – 600 UAH. A good offer provided the company with demand: the turnover of “LED Technologies of Ukraine” is 1 million UAH. per month. The company also outperforms competitors in that it is ready to adapt its technologies to the needs of the customer. One of the typical examples: a businessman bought a building for a sports club with an installed power supply of 5 kilowatts. After connecting all the simulators, the limit was chosen, and another 1.5 kilowatts were needed for lighting. Kharkiv residents have figured out how to illuminate the entire space of the sports club, keeping within just 260 watts. Oleg Marchuk and Gennady Nikitsky not only plan to become the first in the Ukrainian market, but also supply their modules to other manufacturers of LED lighting systems. This market seems to them much more attractive. In the near future they plan to start deliveries to the US and Asian countries. “Even if we have a small percentage in these markets, we will be happy,” entrepreneurs admit. Feeling a taste for innovation, last year they tried to initiate the creation of a science park in Kharkov.